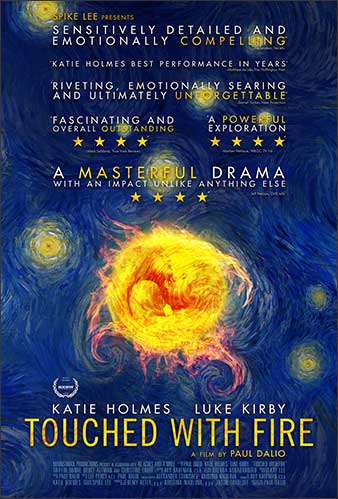 Touched with Fire stars Katie Homes and Luke Kirby as two poets with bipolar disorder whose art is fueled by their emotional extremes. When they meet in a treatment facility, their chemistry is instant and intense driving each other’s mania to new heights. They pursue their passion which breaks outside the bounds of sanity, swinging them from fantastical highs to tormented lows until they ultimately must choose between sanity and love.

Inspired by the filmmaker’s own struggles overcoming bipolar disorder, Paul Dalio wrote, directed, edited and scored his feature film debut which also includes performances by Griffin Dunne, Christine Lahti and Bruce Altman. The film is produced by Jeremy Alter and Kristina Nikolova and executive produced by Spike Lee. Touched with Fire will be released theatrically on February 12, 2016 (Valentine’s Day weekend) and has a running time of 110 minutes.