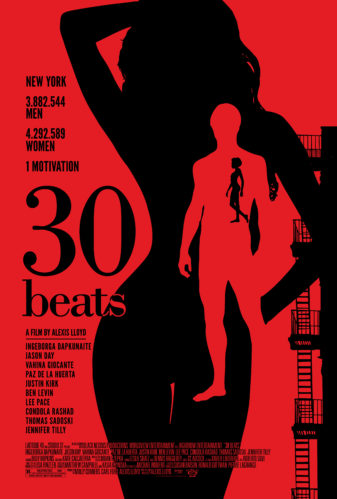 Ten disparate New Yorkers are connected by a summer heat wave and a series of steamy sexual encounters in 30 Beats, featuring an ensemble cast that includes Lee Pace (The Hobbit), Condola Rashad (“Ruined,” “Stick Fly,” “Steel Magnolias”), Justin Kirk (“Weeds,”) Thomas Sadoski (“Newsroom”) and Jennifer Tilly. Written, produced and directed by Alexis Lloyd (The Claim), the film is a light-hearted exploration of seduction, spontaneity and self-discovery that’s as sultry and vibrant as the city in which it’s set.
When the doe-eyed JULIE (Rashad) seeks out worldly anthropologist ADAM (Kirk) in a determined effort to lose her virginity, the stage is set for a delightful dive into a world of sensual singlehood in New York City. The encounter triggers a chain reaction that connects 10 city-dwellers over a period of three sweltering days. After de-flowering Julie, an out-of-sorts Adam looks up seductive psychic ERIKA (Tilly), who in turn frolics with bike messenger DIEGO, who later declares his love for the scarred beauty LAURA, who subsequently tries to seduce her chiropractor MATT (Pace).
The shifting locations, emotions and circumstances surrounding these rendezvous paint a multi-faceted picture of passionate—and often unrequited—love in the city. Matt’s lust for switchboard operator KIM is complicated by a lesbian fling, which also indirectly affects Kim’s interest in speechwriter JULIAN, who in turn is enthralled by ALICE, a call girl on the verge of a career change. Taking on one last job, Alice pays off a debt by dutifully seducing the virgin SEAN, who it turns out is the best friend of Julie—the virgin whose first encounter opens the film. The tryst brings the round of random-seeming encounters full-circle as Sean and Julie debate the risks and rewards of introducing sex into their comfortable, platonic relationship. Will they or won’t they? It’s just another thrum of the city’s heartbeat of love.