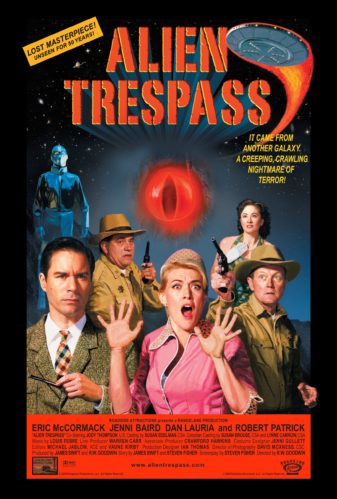 ALIEN TRESPASS is an exciting and entertaining homage to the great science-fiction movies of the 1950s, the post-war boom period when the country was filled with great hope and prosperity and, at the same time, lived under the threat of nuclear annihilation.

The story begins in 1957 in the star-filled skies above California’s Mojave Desert. It is a special night for noted astronomer Ted Lewis (ERIC McCORMACK), who is preparing a special dinner for his beautiful, adoring wife Lana (JODY THOMPSON) to celebrate their wedding anniversary. In another part of town, Tammy (JENNI BAIRD), a waitress at the small local diner with big plans for the future, looks out her window and is excited to see a shooting star, which she takes as a good sign for her dreams.

But what Dr. Lewis and Tammy assume is a shooting star, is really an alien spaceship. The fiery ball hurtles toward earth and crash-lands on a butte in the desert. The only witnesses are Dick (ANDREW DUNBAR) and Penny (SARAH SMYTH) who are necking in a nearby lovers’ lane.
A tall, metallic alien named Urp emerges from the craft unharmed, alarmed to discover that the monstrous Ghota, who was also on board, has escaped. The menacing one-eyed creature’s unquenchable appetite could mean the end of civilization as we know it.

Urp is the only one who knows how to stop the hideous extra-terrestrial, but to do so he has to take over the body of Dr. Lewis and enlist the aid of Tammy, the only human in town willing to believe and trust in his mission. The local police – including police Chief Dawson (DAN LAURIA) and officer Vernon (ROBERT PATRICK) – are confirmed skeptics and offer little help. Together, Urp and Tammy must hunt down the Ghota and neutralize it before it consumes all the local inhabitants and uses the human fuel to multiply and conquer the world!