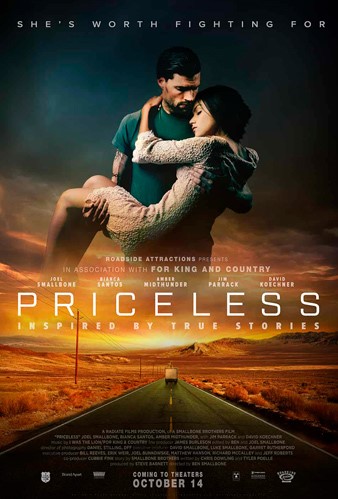 Inspired by true events, PRICELESS is a powerful drama/thriller about James Stevens who was, at one time, a good man with a great life — but that was then and this is now. After the tragic death of his wife and losing custody of his little girl, James is at the darkest crossroad of his life. Angry, desperate, and unable to hold down a steady job, he agrees to drive a box truck on a shady, one-time trip cross country for cash — no questions asked. But when he discovers what he is delivering is actually who, he is compelled to save two beautiful and frightened sisters who are unaware of the danger that awaits them.
Can love, strength, and faith redefine his past and change the course of his future? This unlikely hero risks it all to save these women, confront the forces that oppose him and ultimately discover the life he was meant to live.
From the creative minds behind the two-time Grammy Award-winning band for KING & COUNTRY, PRICELESS stars Joel Smallbone (for KING & COUNTRY), Bianca Santos (THE DUFF), Amber Midthunder (“Longmire”) with Jim Parrack (SUICIDE SQUAD, “True Blood”) and David Koechner (ANCHORMAN, “The Goldbergs”). PRICELESS is the first film from the Smallbone Brothers. Ben Smallbone directs from the script by Chris Dowling & Tyler Poelle. The film was produced by Steve Barnett (300). David Smallbone and Luke Smallbone serve as executive producers, and Jacob “Cubbie” Fink is co-producer. Roadside Attractions will release the film in theatres nationwide on October 14.