The Italian film stars Roberto Benigni and newcomer Federico Ielapi. Roadside is hoping to debut the movie in more than 2,000 theaters. In recent days, hundreds of cinemas have been forced to reclose because of the ongoing pandemic. At the same time, those locations that remain open need product.

“We love the emotional and fantastical storytelling of this new Pinocchio, and, with what’s shaping up to be a ​challenging holiday season for families, we think this English language version will be a welcoming escape for​ any kids and parents with a nose for adventure and mischief,” Roadside co-presidents Howard Cohen and Eric d’Arbeloff said.

Wonder Woman 1984 is also set to debut Christmas Day in theaters and on HBO Max.

Garrone’s Pinocchio premiered at the 2020 Berlin Film Festival and stars Benigni as Geppetto, the old woodcarver whose puppet creation, Pinocchio, magically comes to life with dreams of becoming a real boy.
Pinocchio has been translated into more than 300 languages from the original 1883 novel written by Carlo Collodi, and remains amongst the top 50 bestsellers globally. 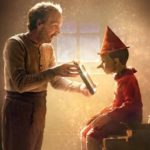