Played by Moore, Ryan Kiera Armstrong, Lulu Wilson and Alicia Vikander, the story follows writer and activist Gloria Steinem at different stages throughout her over 80 years of life.

Award-winning director Julie Taymor (Frida) tells PEOPLE “the heart of the story” revolves around how “different Glorias interact with each other.”

“Gloria is a living leader,” Taymor says of what inspired her to make the film. “A hero because she carved out her course in life against many odds and made it work for herself and for millions of women.”

“Her humility, her ability to listen, her humor, her ease with she moves across cultural, racial and gender lines,” Taymor says. “She is the Great Communicator. I love her positive attitude to conflict. She is always looking to ‘the upside of the downside’ and one of her great expressions is, ‘The truth will set you free but first it will piss you off.'”

Throughout The Glorias, the actresses playing the feminist icon ride together on “a bus out of time, through their memories and towards their hopes and dreams,” says Taymor.

“They are able to interact with each other, literally sit next to each other on that Greyhound bus traveling to the next march on Washington, or rally against abortion laws, or protest against injustices or conference on the equal amendment rights,” she says. “They also can take each other’s place in the middle of a scene.”
Also in the cast is Monáe, who plays activist and child-welfare advocate Dorothy Pitman Hughes in the film. Pitman Hughes and Steinem became friends during the feminist movement in the U.S. and their friendship is a cornerstone in the film.

Taymor hopes the film’s message will impart on younger audiences “that getting involved in changing the system is not an option.”

“It is a must, now!” she says. “If you care about your freedoms and the freedoms of others and you care about the environment, equality, justice and so on you have to get out there and vote, inspire others to vote, go for the truth.”

The Glorias is available on digital and streaming exclusively on Prime Video on Sept. 30 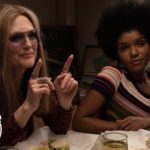