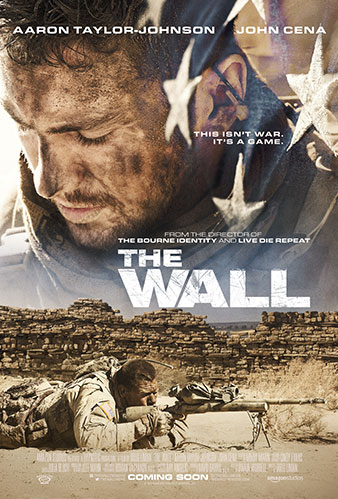 “The Wall” is a deadly psychological thriller that follows two soldiers pinned down by an Iraqi sniper, with nothing but a crumbling wall between them. Their fight becomes as much a battle of will and wits as it is of lethally accurate marksmanship.  Directed by Doug Liman (“Mr. & Mrs. Smith,” “The Bourne Ultimatum,” “Edge of Tomorrow”), “The Wall” stars Aaron Taylor Johnson (“Nocturnal Animals,” “Kick-Ass,” “Savages” “Godzilla,” “Avengers: Age of Ultron”) and WWE star John Cena (“Trainwreck,” “Sisters,” “Daddy’s Home”), and is written by first-time screenwriter Dwain Worrell from his Black List script.