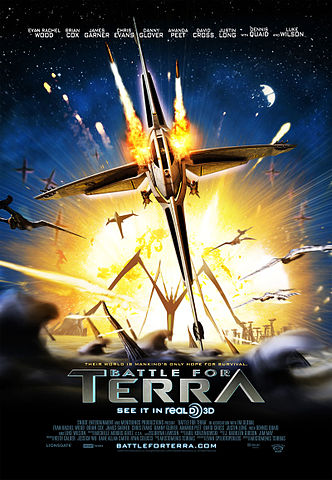 When the peaceful inhabitants of the beautiful planet Terra come under attack from the last surviving members of humanity adrift in an aging spaceship, the stage is set for an all-out war between the two races for control of the planet. But will an unlikely friendship between a rebellious young Terrian (voiced by Evan Rachel Wood) and an injured human pilot (Luke Wilson) somehow convince their leaders that war is not the answer?

Living in perfect harmony in gravity-defying cities above the clouds, the inhabitants of the planet Terra are complete strangers to war. So when Terra is invaded by human beings fleeing a civil war and environmental catastrophe, many of the Terrians at first welcome the invaders as gods. Only the feisty young Mala (Evan Rachel Wood) fights back, luring one of the invading spacecrafts to destruction after her father is abducted, then rescuing its pilot—a human named Jim (Luke Wilson).

In return for saving his life, Jim promises to help Mala find her father, taking her on a perilous journey to the Ark—the humans’ aging mother ship. Along the way, Mala and Jim learn that their people really aren’t so different from one another. But with the Earthforce army poised to invade Terra and render it uninhabitable for Terrians, Mala and Jim must find a way to help the two races coexist—before it’s too late.